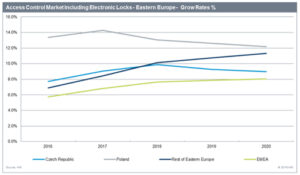 Although the overall European market for electronic physical access control devices grew only by 5.5 percent in 2015, Eastern Europe has been a bright spot for the industry. Between 2015 and 2020, the Polish market is forecast to grow at a 13.1 percent compound annual growth rate (CAGR) and the Czech Republic will grow at a CAGR of 9 percent from 2015 to 2020.

There have been substantial changes in end user outlook in Eastern Europe surrounding the need for access control systems. Now end users have decided that the investment in high-quality electronic locks, advanced reader types (such as MIFARE DESFire and ICLASS SE) and other advanced access control systems is worthwhile.

This shift in end user perceptions is caused by rising security concerns in the region. Poland has not been affected directly by the territorial disputes occurring farther east in Ukraine, but the Poles are acutely aware that the region could become more unsettled if the situation were to escalate. Security concerns over Russia have led to investment in governmental access control, and government policy on access control is causing a similar impact on the private sector as well. Investment was initially focused on critical infrastructure and government markets, but now manufacturing, commercial and financial markets are experiencing big upticks in growth. Investment is also spread through each of these vertical markets, with suppliers reporting that both new construction and the retrofit markets are benefiting from the surge in available money funds.

The Czech Republic is also interested in better higher quality access control products, and security concerns have played a major role in driving the market forward, but to a lesser extent than in Poland. The Czech economy has also been performing far better than previous expectations. The economic outlook for the country peaked in 2015 with gross domestic product (GDP) growth at 4.3 percent, supported by strong industrial production.

IHS Economic Country Risk forecasts show industry production will continue to be strong, but with risks mounting, a slowdown in GDP back to the 3 percent range will occur in 2016.

Due to the growth experienced in these countries, a variety of small local manufacturers have started to appear — both on the hardware side and the software side. The growth of local companies should help develop end-user confidence in the whole market, which should lead to more long-term projects.  These local companies will have an added advantage in regional markets, as they are better able to tailor their products to local tastes and can also be more reactive to end user demands.

Recent success in Poland and the Czech Republic is starting to encourage development in adjacent countries — including increased growth in Hungary, Serbia and the Baltic region. Companies based in Poland and the Czech Republic will likely play a big role in shaping the market in the rest of Eastern Europe, which is forecast to grow at a CAGR of 9.5 percent from 2015 to 2020.

The ECJ working time ruling and you

The impact of IoT on security and systems