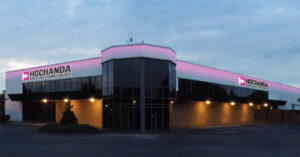 Hochanda, the 24-hour shopping channel broadcast across Freeview, SKY and Freesat, has a purpose built office with its own TV studio, designed to withstand the rigours of live broadcast. The company required an access control system that could adapt to their diverse working patterns, without impeding staff.

Jeremy Haynes, design surveyor at Sonic Security Services was contacted and recommended Grosvenor Technology’s Sateon Enterprise for the access control system. The most important factor was to be able to cope with the diversity of people registered – the building is host to TV production teams, presenters, administrative staff and the Hochanda call centre, as well as the numerous freelance employees coming in and out on a daily basis, each with their own access requirements. Remarkably, there was no need to factor in permission for any filming crews, thanks to Hochanda’s robotically operated studio working independently of personnel.

“The amount of people coming in and out of Hochanda on any given day makes it difficult to monitor without impeding access,” explained Jeremy Haynes. “What they needed was an access control solution that kept their daily lives as streamlined as possible. Sateon was able to grant personalised access to an employee’s designated work area with just a few clicks, while visitors’ passes were granted and rescinded at the touch of a button.”

Sateon products are entirely browser based, eliminating the need for software installation on any one computer. The decision to go with Enterprise over Grosvenor’s Pro solution granted greater visibility across the building, with features such as facial logs and live maps offering an additional layer of security and quick response to alerts respectively.

“Hochanda now has an access control system worthy of the forward thinking, technologically savvy media company that it is,” added Nick Plumb of Grosvenor, “The company can monitor time and attendance of staff and contractors and integrate data with third party software such as payroll, allowing for a simpler process, less administration and reduced cost for all.”