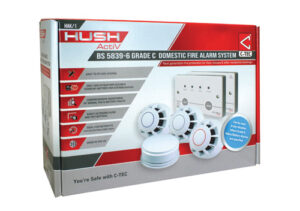 Designed to increase the level of fire protection in flats, apartments and high-rise residential buildings, each kit contains everything needed to create a LD2 standalone conventional fire alarm system in an individual dwelling.

Andy Green, C-TEC’s Marketing Manager, said: “We are very excited about Hush ActiV and confident it will be a hit with specifiers and installers in the domestic fire alarm market. As a fully-monitored BS 5839-6 Grade C system, it constantly interrogates the status of the system’s wiring circuits, battery and power supply, reporting any faults to the main Controller. As a result, it offers higher levels of fire protection than the unmonitored Grade D Mains Battery Alarms typically used in domestic dwellings.”

A feature of Hush ActiV is its accessibility. Residents are provided with detection, alarm, silencing and test facilities at light-switch level so they can test their own devices, be alerted to system faults and hush any false alarms. In addition, the fact that the Controller’s HUSH and TEST buttons can be operated whilst standing or sitting in a wheelchair at floor level helps facilitate full compliance with the Equality Act.

Hush ActiV reportedly offers up to a 50% reduction in the mains power of a typical Grade D system, less plastic and one replaceable lithium-ion battery per system (providing over 72 hours standby).