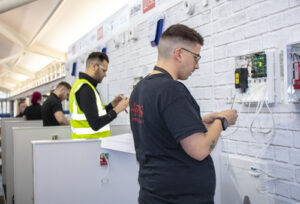 Electronic Fire and Security apprentices nearing the end of their training have showcased their skills in a three-day competition at New College Lanarkshire. Forty third-year Modern Apprentices took part in the Security Skills Challenge at the Kirkintilloch Campus.

The main atrium of the building was transformed with a row of ten purpose-built competition booths in which trainees had to complete a six-hour challenge to install a fire or security alarm.

The event, which was hosted in partnership with security equipment firms CSL, Dahua and Orisec, was organised to coincide with Scottish Apprenticeship Week 2019.

The challenge was designed as a real-life scenario in which students use the skills and knowledge gained over the course of their studies to install and commission either a fire alarm or intruder alarm to the relevant British and European standards.

The four apprentices who garnered the most points from their installations will now receive sponsored spots at the IFSEC International event in London in June to compete against the best in the UK at the Engineers of Tomorrow competition.

The winning apprentices were:

David Scott, Curriculum and Quality Leader at New College Lanarkshire, said: “The apprentices put on an amazing spectacle. Year on year, the standard of the apprentices’ work continues to improve. The Electronic Fire and Security team organised an amazing event, and I am proud to be part of such a hard-working team of professionals.

“Without the continued support from our partners – BSIA, NSI, CSL, Dahua and Orisec – events such as this just wouldn’t be possible, so I’d like to say a big thank you to all the sponsors who made the event such a success.”

Among those watching the first day of competition included Simon Banks, Group Managing Director of CSL, who founded the apprenticeship in Fire and Security in 2011. He said: “These engineers are ‘oven-ready’ when they go to the workplace because they’ve had all the knocks and spoils of a real environment. They’re not doing installations on to chipboard – they’re installing on to plasterboard and putting the cables down the back. Those sorts of educations are invaluable, and it’s great to see such a realistic environment.”

Firexo admitted as full member of the FIA