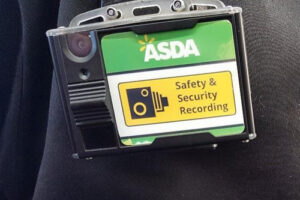 New figures show that attacks on retail workers in the UK are on the rise, with over 42,000 violent incidents recorded in the last year, costing retailers around £900 million.

The British Retail Consortium’s (BRC) annual Retail Crime Survey states that the biggest concern for retailers, and their threatened employees, is the increased willingness for career criminals to use violence and brandish weapons when confronted over theft. On top of this, the now common requirement for retail staff to age-check and refuse sales, triggers more violence and threats.

In a bid to combat this problem large retailers are looking at new ways to help staff feel more valued and secure with Asda, for example, recently announcing that after a successful trial it is utilising body worn cameras to enhance in-store security.

Edesix VideoBadges are being utilised in over 250 Asda sites nationwide and as a result of this partnering strategy, the retailer has been able to improve colleague security, diffuse aggressive and volatile situations and reduce valued investigation time, thus reducing costs. Since the deployment, Asda has secured convictions relating to theft and violence against staff.

Richie McBride, Managing Director of Edesix, explains: “The increased threat of violence on a daily basis is forcing all retailers to re-think security policies, as quite literally lives are at risk if retail staff are not given more protection. Body worn cameras are proven to improve the safety of colleagues in public facing roles and shoppers within the stores, whilst producing compelling evidence when needed. The cameras speed up the handling of incidents, insurance matters and complaints.”

BSIA adds two experts to its Operating Board