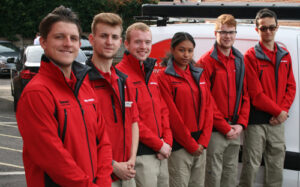 Allcooper is celebrating the arrival of its latest intake of apprentices, who have joined the company to begin careers as security systems engineers.

Six apprentices have been recruited on the back of a newly-formed partnership between Allcooper and South Gloucestershire & Stroud College, who have worked together to implement the security systems apprenticeship. The two-year course leads to full NVQ qualifications and aims to bring more young people into the security industry.

Having officially joined Allcooper on 1st August 2016, the apprentices will take part in Allcooper’s apprenticeship scheme, which features a programme of product specific and health and safety training. They will also be pairing up with senior Allcooper engineers to gain practical skills and experience of working on different systems and sites. Their time will be combined with study at South Gloucestershire & Stroud College for one day per week, starting in October 2016.

All aged between 17 and 21, William McKay, William Ellis, Kyle Sterry, Louis Murphy, Sean Doel and Charlie Euwin will each be learning to install and maintain the very latest security technology including intruder alarms, CCTV and access control systems. An exciting development for Allcooper is that Charlie Euwin has become their first female employee to take on an engineering role.

As a former apprentice with the family business himself, Allcooper Director, Roman Cooper hopes the apprentices can follow in his footsteps by building long-lasting careers within the industry. Roman explained: “Encouraging young people is key for the future of security, so I’m thrilled to see another group grasp the opportunity to learn and develop through our apprenticeship scheme. The fact Charlie has become our first female engineer is great news for the business and shows the growing appeal of a career in security, regardless of age or gender. I’m looking forward to seeing them all progress over the coming years.”

Vanderbilt completes the purchase of ACT