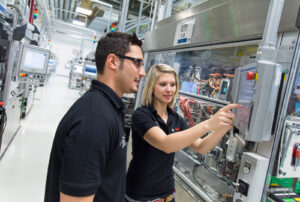 The Bosch Group has reported a good start to 2015. In the first quarter, sales grew by roughly 13 percent. After adjusting for exchange-rate effects, the increase was 5.4 percent. For the current fiscal year, the company expects its sales to grow 3 to 5 percent after adjusting for exchange-rate effects. Because these effects are considerable, Bosch expects its nominal sales growth to be higher than this range.

Presenting the annual financial statements in Gerlingen, Germany, Dr. Volkmar Denner, the chairman of the Bosch board of management, said: “Our economic and technological strength in our established fields of business allows us to open up new market segments.” Internet-enabled products and internet-based services are one of the focal points of the company’s future sales growth. “We are driving connectivity forward in all our business sectors and playing an active role in shaping it,” Denner added.

In the past business year, the company increased its sales by a nominal 6.3 percent to 49 billion euros. Adjusted for exchange-rate effects, growth was 7.4 percent. As a result of negative exchange-rate effects to the tune of some 500 million euros, the temporarily strong euro had a considerable impact on the sales figure. This strong development of sales also contributed to an improved result. Earnings before interest and taxes (EBIT) rose to 3 billion euros last year – a year-on-year increase of roughly 10 percent. Bosch thus disclosed an EBIT margin of 6.2 percent in 2014. This is roughly one percentage point better than the value for 2013, adjusted for one-off and extraordinary effects.

“In 2014, we were successful despite only moderate global economic growth,” said Dr. Stefan Asenkerschbaumer, the Bosch chief financial officer and deputy chairman of the board of management. Following the complete takeover of BSH Bosch und Siemens Hausgeräte GmbH (now BSH Hausgeräte GmbH), the supplier has strengthened its position in the area of smart homes. And with the acquisition of ZF Lenksysteme GmbH (now Robert Bosch Automotive Steering GmbH), Bosch has added to its portfolio in the growth area of automated driving.

Despite an economic situation that remained difficult, Bosch increased its sales in Europe by 2.1 percent to 26 billion euros. Adjusted for exchange-rate effects, growth was 2.5 percent. The region thus accounted for 53 percent of total sales. In Germany as well, sales were up year on year, at 10.8 billion euros.