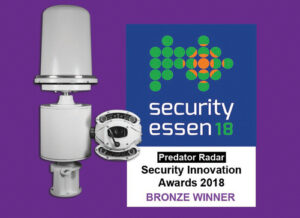 Under the leadership of a member of the Board of the Federal Association of Independent German Consultants and Engineers, the final 13 award submissions were evaluated according to their innovation content, user benefits, economic viability and reliability.

“Winning a Security Essen Security Innovation Bronze Award against some of the world’s leading security equipment manufacturers is a great honour for us,” enthused Mark Rees, Managing Director at 360 Vision Technology.

While 360 Vision Technology took the Bronze Award in the Technology & Products section it was Jansen Tore’s WK5 door that won Silver with UrbanAlps taking Gold for Stealth Key.

Brian Foster is promoted at C-TEC