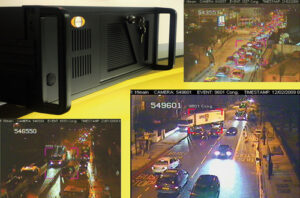 Ipsotek has developed a new technology in partnership with Transport for London (TfL) which is helping to keep traffic flowing through one of Europe’s busiest cities.

As one of a range of measures that is helping to smooth traffic flow in the capital, Ipsotek has worked with TfL to develop new CCTV analytic technology that can automatically detect traffic build-up and alert traffic operators to quickly implement congestion-relieving procedures.

Ipsotek developed the Image Recognition and Incident Detection (IRID) system, making use of their own video analytics technology. The technology constantly analyses each video stream from existing CCTV traffic monitoring cameras and uses pre-configured ‘congestion definitions’ to alert operators at TfL’s London Traffic Control Centre (LTCC) when a build-up of vehicles threatens to develop into a problematic congestion situation.

London’s LTCC aims to reduce congestion, carrying out ‘real-time’ traffic management while at the same time providing up-to-date traffic information to the media and other interested stakeholders, including other highway authorities in London.

The Ipsotek IRID system works by monitoring each camera feed, ignoring ‘background’ image details, which are of no interest to traffic coordinators, such as trees and lamp columns. The remaining ‘foreground’ objects, namely vehicles, are analysed for behaviour. Many algorithms can be used, but for the IRID system, stationary or slow vehicles are the primary concern. Once the system detects a build-up of stationary or slow vehicles, a desktop alert is sent to traffic coordinators prompting them to address the situation with a number of appropriate actions.

Before the introduction of IRID, LTCC traffic operators had to manually trawl through more than 1,200 CCTV cameras, painstakingly looking for congestion issues across the capital’s road network. Because of this, traffic situations were often not spotted until they became severe congestion incidents – with the obvious severe delay on traffic movements across the capital.

Once a problem is automatically detected by the IRID system, TfL’s traffic operators are able to implement traffic signal timing plans to clear any impending congestion. Traffic signals can be coordinated to keep traffic away from an area, or help to move the flow of vehicles around an incident safely. “Traffic congestion can develop very quickly, from a small jam to a lengthy tailback, in just a few minutes,” says Bill Flind, Chief Executive, Ipsotek. “That’s why fast detection and an effective response to these situations is vital.”

Ipsotek and TfL have been researching and working on the development of this technology for more than five years, producing a viable tool that could also be used by other highways authorities across the country. To date, TfL has invested £180,000 in trials, training, and the deployment of the system to the existing 20 cameras that make up the pilot scheme. With a planned expansion to the scheme, this technology will continue to benefit London’s road users, and will see the development by TfL spread to benefit other cities across the UK.