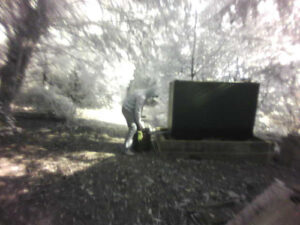 A team of young tech entrepreneurs has announced a real-time, remote area security system in answer to the continuing rise in rural crime, which cost rural communities an estimated £43 million last year.

Developed over three years in consultation with Hampshire Police, TelemetriCop is a long-range, radio mesh networked, wireless security camera system specifically designed to counter crime as it develops rather than after it has happened.

As Managing Director Hugo Stride explains; “I live in a remote, rural property, and have, like a lot of people, suffered from thefts from outbuildings, fly tipping and opportunistic crime. As a result we looked at existing systems to see what we might do to increase security. We were unable however, to find anything, regardless of cost, which had been designed to overcome the specific challenges rural security, and the protection of remote assets, demands. We designed TelemetriCop to address all the shortcomings of conventional CCTV for rural, remote area security. Most of all we wanted something capable of stopping a crime from happening there and then, rather than just supplying a photographic record of it after the event.

Commenting on the development of the TelemetriCop system Stride says; “The technical challenge was to create something that could communicate, without transmission costs, over great distances in areas where there would likely be no WiFi or mobile phone coverage. It needed to be self-powered, operate day and night and, so that people wouldn’t incur the expense of needing someone to look at a screen constantly, we wanted to use the latest image recognition techniques and provide an automated service with virtually no operating costs.”

Potential users of the system include farmers, estate owners, unattended second home owners, rurally-based businesses, security firms, critical national infrastructure (e.g. power stations, reservoirs etc.) and all other people who own or are concerned with property or assets which are remotely located and potentially vulnerable to theft or criminal damage.

The system works as follows: operating on a licence-free UHF frequency, the TelemetriCop camera is armed with a motion-activated sensor which triggers a photograph to be taken and a highly compressed image then to be transmitted to a base station. The image is then sent to a server and automatically passed through Telemetricor’s own image recognition system which, using image filtration algorithms, analyses whether the information may be actionable or not. In this way, false alarms caused by, for example, wildlife, shadows or wind-blown foliage are generally avoided and information which the system has deemed of potential interest is sent to the user. Any image that does pass this filter is immediately relayed to an app which alerts the user and allows them to view the image – either on their smart phone and/or their personal computer via a secure web platform – and assess the potential threat. The images can then be shared at the touch of a button with a preassigned response team and appropriate action then taken.

On average the time between the photograph being taken and the user receiving a potentially actionable image is just 60 seconds.