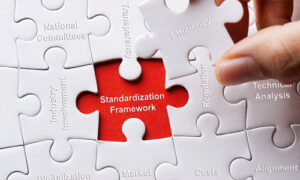 One of the top priorities of the European electronic fire and security industry is to establish a functioning internal European market. The industry, represented by Euralarm, wants to ensure that the European fire safety and security industry fulfils its potential to contribute to European growth and employment and that it reaches its abilities to compete successfully in home and global markets. Standardisation is key to be able to reach these goals. To speed up and maximise efficiency of the standardisation process, Euralarm has written a Briefing on Market Driven Standardisation (MDS).

Establishing a functioning internal European market is of vital importance to Europe. This requires a comprehensive, coherent and effective standardisation framework. To avoid delay and eliminate multi-billion Euros of costs the current process needs to be updated and changed.

Instead of high costing standards, the industry-based Technical Standards facilitate interoperability between countries and promote greater alliance of currently fragmented markets. This approach is in line with the ideas of the European Commission that calls for “an overall design for what the standardisation should look like” and wants to “instigate an end-user driven standardisation based on a careful identification of existing, national, European standardisation organisations”. Euralarm strongly agrees with these calls and wants to support them through their new Briefing. The paper not only criticises but also gives concrete proposals from experts involved in the day to day development of standards.

Euralarm believes that the standardisation evolution process as we know it now could be dramatically improved through some simple measures. A more EU-centric approach of CEN/CENELEC standardisation is suggested in the Briefing. This would avoid unnecessary, time-consuming and costly duplication of work at a national level. This cost reduction would result in benefits for all stakeholders, from governments, through companies to the customers. To speed up and maximise efficiency of the standardisation process, Euralarm gives ten proposals in the Briefing on Market Driven Standardisation.

The new Briefing emphasises the importance of a faster, more efficient standardisation process. The current structure and the role of the National Committees are causing the European security industry to lose too much time and money on slow processes. With the proposals in this Briefing, the industry can quickly and easily speed up these processes, so it can adjust its standards to the rapidly changing fire safety and security industry and make them compatible across borders. All these proposals and more details can be found in the complete Briefing on the website of Euralarm at www.euralarm.org