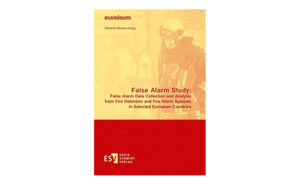 Euralarm has carried out a European study on false alarms which has now been published as a paperback by the academic editor Eric Schmidt Verlag.

The study on false alarms has been conducted by a task group of Euralarm consisting of experts in the field of fire safety technologies with Sebastian Festag from Heaktron acting as chairman of the task group. The study focuses on false alarm data collection and analysis from fire detection and fire alarm systems in selected European countries.

The impact of budget cuts and a perceived high rate of false alarms have lead in some European countries to changes on the typical reaction of fire services. In some countries for example, verification is required before intervention forces are deployed, in order to avoid unjustified costs. This calculation is however limited to the impact of false alarms on fire services alone: it could lead to an increase of the risk to lives and inflict more cost in overall to society. The study seeks to establish the true cost of false alarms, from country to country.

Through its scientific approach, the study offers a clarification of false alarms as a phenomenon. It includes a description of the processes to initiate fire service intervention, formulas to calculate false alarm ratios, as well as a methodology of the overall analysis. This allows for a precise picture of the situation in selected European countries as regards false alarm: Germany, Great Britain/England, Switzerland, Sweden and Austria/Vorarlberg, are covered in the study. The study also contains recommendations and strategies to reduce false alarms, which are based on carefully examined statistics on fires and, in particular, the number of fire alarms due to detection of actual fires by fire alarm systems, as compared to the false alarm rate.