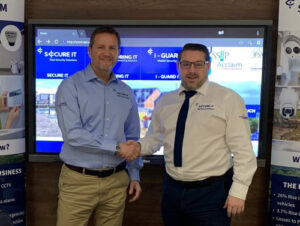 John Reid has been appointed the new Head of Sales at SecureIT. Having previously been responsible for the growth and development of a regional security company that was recently sold to a national company, John was headhunted by SecureIT to spearhead their sales operation in South Wales.

Since hanging up his rugby boots, the ex-Newport RFC player who still lives in the city, has worked in the business development departments of Bristol RFC, Hampshire CCC and Dragons Rugby before moving into the security industry.

Philip Popham, founder and MD of the Bridgend-based company has plans to further increase the client base throughout the region and recruited John to fulfil this objective saying: “John is a well-known and respected professional, we are very pleased he has joined the team and look forward to starting this new chapter for SecureIT.”

Commenting on his new role, John Reid said, “When Phil approached me about the Head of Sales position and informed me about their plans for the business, I was delighted to accept the role. Their reputation precedes them, and we have already begun to secure new contracts.”