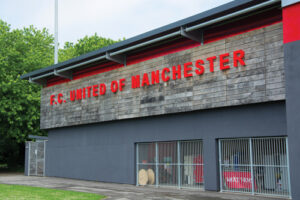 F.C. United of Manchester is a semi-professional football club based in Moston, Manchester, founded in 2005 by Manchester United supporters opposed to American businessman Malcolm Glazer’s takeover of the Old Trafford Club.

After sharing multiple stadia across Greater Manchester between 2005 and 2015, F.C. United opened their own ground, Broadhurst Park in May 2015.

During construction of the new stadium a combination of an analogue CCTV system was installed and supported by onsite manned security 24/7. A review of security and associated costs was undertaken by the club, who contacted security service provider Bluegrain to assist.

Bluegrain worked with COP Security to review the site and all available options. Bluegrain proposed replacing the analogue system and install a selection from Dahua’s IP smart camera range. The capability of the cameras meant that no further manned guarding was required.

As the existing system was installed and run using coaxial cable COP recommended using the IP over coax converters, this would allow Bluegrain to utilise the features offered by the Dahua IP range.

Mark Daly, Technical Director at Bluegrain said: “One of the biggest challenges we faced was the legacy system being wired using coaxial cable, with some of the longest runs reaching up to 500 metres. The IP over coax converters were a perfect solution for us and allow us to utilise the extra features of the IP kit. With the cameras built-in features we can create zones designed to detect intruders at any time of day. Tie that in with the CMS software, and we can offer round the clock protection.”

One of the largest problems F.C. United faces is vandalism when the stadium is closed. The new install allows Bluegrain to monitor the site around the clock using the remote client management software (CMS) and setup perimeter alerts. Once an object enters into a pre-set area Bluegrain’s control centre is notified and can view real time live images, from this they can then determine if security is required to attend the scene.

Damien Chadwick, CEO of F.C. United is delighted with the results of the upgrade “The upgrade has been great for the club! Not only have we improved our overall security package, but because we don’t need on site security 24/7 we will save a great deal in the future.”