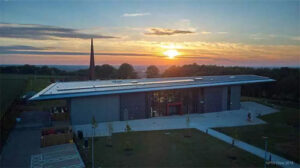 Working with Freedom Fire and Security Maintenance, Hochiki Europe has provided a range of solutions to The International Bomber Command Centre (IBCC) in Lincoln. The memorial is home to one of the most comprehensive records of the Bomber Command unit in the world.

As part of the estimated £16million IBCC building project, local providers of fire and security systems, Freedom, were brought on board to specify and install a fire alarm system that would perform without disrupting the aesthetics of the space.

Freedom selected products from Hochiki’s ESP range of intelligent addressable fire detection and alarm equipment opting to use black sensors to minimise their visual presence throughout the centre. It was for this same reason that the sensors had to be carefully positioned throughout the building. Having carried out multiple site surveys, Freedom fit the sensors so that both design and safety regulations were successfully met.

In total, 58 optical smoke sensors were installed throughout the site, along with three heat sensors, 23 remote LED indicators and 14 manual call points. All devices are controlled via two intelligent fire panels provided by Kentec Electronics, part of the Hochiki group of companies.

Brian Foster is promoted at C-TEC