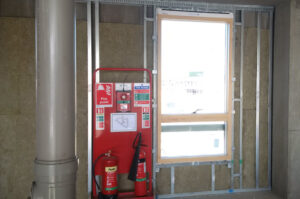 A network of Cygnus wireless fire alarm systems has been installed on a construction site for the University of Cambridge. The North West Cambridge Development alongside the M11 is a plan to build a new district to be known as Eddington creating affordable housing for university staff, as well as student accommodation, academic and commercial space.  In addition to housing and infra-structure, an integral part of the new district will be a primary school, a nursery, a doctors’ surgery, supermarket and retail, senior living, a hotel, and sports pitches.

Bull Products’ Cygnus wireless alarm systems feature in the one of the construction sites in the centre of the development where 349 homes are being built together with the food store, energy centre and health centre.  Across this construction site, there are 170 Cygnus wireless modules that have been installed by BAM Construction.  These modules include fire call point alarms, combined fire call point and first aid alarms, heat detectors, smoke detectors, some of these being fitted with PIR intruder sensors, and all are linked wirelessly to a central control panel.

Guy Milton, BAM’s Senior Site Manager commented: “The development is a very large site, covering a lot of areas so we needed to record and receive alarm information at a central location. The Cygnus system has no loss of signal or false alarms and it can be easily moved and re-addressed to suit changing circumstances on site”.

Intended specifically for use on construction sites, the CE marked Cygnus system has been designed for use in steel structured and dense concrete buildings and areas where there are many other radio frequencies in operation.  Where multiple sites are within range of each other, the Cygnus system is designed to operate on different site addresses so as to keep each system separate and interference-free. The Cygnus alarm system can link as many as 480 alarm and detector units in different zones on a construction site. A PIR option is now available on any of the modules which can detect an intruder and alert off-site personnel for added safety protection.