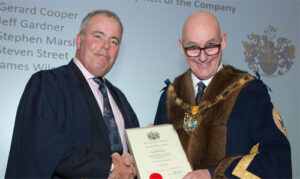 Allcooper Group Director, Gerard Cooper, has been admitted as a Liveryman to the Worshipful Company of Security Professionals.

Since co-founding the Gloucestershire-based security business in 1987, Gerard has earned a reputation for his knowledge and expertise when it comes to electronic security systems and physical protection solutions. An independent, family firm – Allcooper Group is run in partnership by Gerard and his brother, Roman Cooper, employing over 100 staff across offices in Gloucester, London and Birmingham.

Having focused his attention on offering a specialist service for customers with bespoke security needs, Gerard now spearheads the Private Client arm of Allcooper Group. For elite clients across the Cotswolds, London and overseas, Gerard uses over 30 years’ experience to provide bespoke security consultancy services to high net-worth individuals and businesses.

The Worshipful Company of Security Professionals brings together security professionals from across the UK and aims to promote excellence, education and integrity to its members and those working within the industry.

Liveryman is considered the highest level of membership within the Worshipful Company, and qualifies a member for election to the Court of Assistants. From this, further election through the levels of Warden to Master is also possible. In keeping with City of London traditions there is a cap on the number of Liverymen within the Company. It is the prerogative of the Court to identify those Freemen who fit the qualifying criteria and invite them to be clothed in the Livery of the Company.

Commenting on the accolade, Gerard explained: “Having been a Freeman of the Worshipful Company for several years, it is an absolute privilege to achieve the honour of Liveryman. Whilst the industry continues to evolve and grow thanks to new technologies, it is important to preserve the knowledge and traditions that the Company so graciously stands for. I would like to extend my thanks to everyone involved with the Company for their support and best wishes.”

It is not the first time Gerard has been recognised for his contribution to the industry, particularly for his work in the capital city. He was awarded the Freedom of the City of London in 2015 – a privilege bestowed on valued members of the community, visiting dignitaries, and those who have achieved success or recognition in their chosen field – in this instance – security.