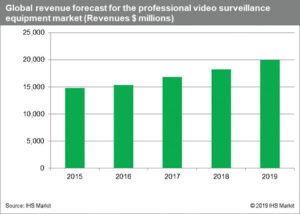 Marking a third year of robust growth, the global professional video surveillance equipment market is set to expand by 9.3 percent in 2019, driven by strong demand for improvements in security, public safety and business intelligence.

In addition to various types of cameras, the professional video surveillance equipment market includes a range of other products, such as recorders, analytics appliances and video management software.

China is driving the expansion of the global professional video surveillance equipment market. In 2018, the country accounted for nearly half of the global business, with 45 percent of worldwide revenue. China’s market expanded by an impressive 13.5 percent last year. Excluding China, the global market grew by just 5 percent.

Although it remains highly fragmented compared with many other markets, the supply base for professional video surveillance equipment is gradually becoming more concentrated. The top 15 vendors accounted 65 percent of global revenue in 2018, compared to 52 percent in 2014.

The surveillance market is also shifting toward the use of network cameras, which are cameras that have their own internet protocol (IP) address and built-in wired or wireless network capabilities. A total of 70 percent of all security cameras shipped in 2018 were network cameras. At the same time, global shipments of analogue HD cameras, fell in 2018.

Facial recognition – on a positive note