Guidelines get tough on health and safety breaches 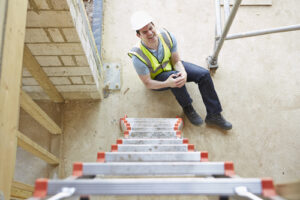 As the Sentencing Council’s consultation on penalties for health and safety offences recommends much tougher fines and even custodial sentences for companies found guilty of health and safety breaches, insurer ECIC is warning contractors and sub-contractors to ensure that they are up to date with guidelines.

The consultation, which aims to clarify where responsibility lies with regards to accidents in the workplace and to punish accordingly, comes at the same time as the news that a building firm was fined £200,000 for corporate manslaughter and £20,000 for health and safety breaches following the death of a worker who fell through a skylight.  The owner of the firm was also sentenced to eight months in prison, suspended for two years and forced to advertise what happened in a local newspaper and on the company website – tarnishing both his personal and the company’s reputation.

This incident highlights the need for all those involved in construction at high levels to take a look at the risks involved.  In the past year ECIC has managed claims for falls from height, including a number of cases involving multiple severe injuries to roofers falling through roof skylights with values ranging up to £250k.

Ian Hollingworth, Claims Manager for ECIC said, “Despite the ongoing work of the HSE to prepare guidelines and advice for contractors, the number of claims for falls from height we see is not reducing year on year. Whilst accidents do unfortunately happen, in the majority of cases they could have been prevented. Carrying out better safety checks, risk management and safety training should be part and parcel of a contractor’s responsibilities and can go a long way to mitigating the risks for all involved.

“With the number of new construction projects rising, and the sixth period of quarter on quarter growth reported for Q4 2014, contractors need to be aware that there will be a corresponding increase in exposure to risk.  Aside from the emotional consequences for all involved, the cost of dealing with claims arising from accidents can escalate easily if you consider the financial implications of bringing in replacement workers as well as the fees that HSE charge for investigating safety breaches. These new sentencing guidelines will ensure that those at fault are suitably punished, but will also have the potential to cause great damage to a company’s financial situation and reputation within the industry.”