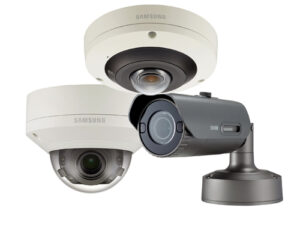 Hanwha Techwin has launched three new Samsung Wisenet P 4K cameras equipped with H.265 compression and WiseStream, a complementary compression technology which controls encoding, balancing quality and compression according to movement in the image. As a result, the bandwidth and storage requirements of the 12MP resolution images captured by the Wisenet P cameras are  reduced and are reported to be similar to that normally used by lower resolution Full HD H.264 cameras.

“The sharpness and clarity of 4K cameras need to be seen to be believed, but they can come at a cost,” said Chris Parry, Country Manager – UK & Ireland for Hanwha Techwin Europe. “Multi-pixel, high definition images can quickly fill up the capacity of an NVR or server when recorded at full frame rate and resolution. The good news is that Hanwha Techwin design engineers have cleverly solved this problem by developing our WiseStream technology.”

When WiseStream is combined with H.265 compression, the company claims that bandwidth efficiency can be improved by up to 75% compared to current H.264 technology. In addition to this bandwidth and storage efficiency, the new Wisenet P cameras feature Digital Auto Tracking which during times of low activity, such as night time, can be used to detect moving objects or people. The cameras also share a list of features with Wisenet Q 2MP and 4MP cameras, such as IR illumination as standard and Defocus Detection which recognises when a camera is out of focus, as well as True Wide Dynamic Range, Hallway View and Lens Distortion Correction, to deliver optimised images in every situation.

The three models in the Wisenet P series are:

False alarms can easily be avoided