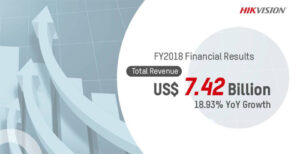 The overall results were described as satisfactory given the complex market environment and slowdown in the domestic Chinese economy.

During 2018, Hikvision continued expanding the number of domestic provincial-level business centres and opened five new overseas subsidiaries and multiple new branch offices. With confidence in the potential for future growth, the company maintained a high level of R&D investment and now employs more than 16,000 R&D engineers. The total workforce grew 31% to a total of more than 34,000 employees.

The company also succeeded in launching new technologies, products and solutions. Among them, the Hikvision AI open platform was further consolidated to accelerate the deployment of intelligent applications; new-generation DarkFighterX series intelligent cameras were introduced to provide more clarity in dark places; and face recognition terminals that help improve building operations, workforce management and safety operations; to name a few.

In 2018, Hikvision continued its investment in new business areas. The EZVIZ Smart Home business demonstrated healthy growth and maintained profitability, while HikRobotics started to achieve profitability. Further investments were also made in other new businesses such as Hikvision Automotive Electronics and Hikvision Intelligent Storage.

Hikvision has also announced its first quarter financial results, demonstrating a total operating income of RMB 9.94 billion, corresponding to year-over-year growth of 6.17%. Net profit attributable to shareholders of the company was RMB 1.54 billion, reflecting a year-over-year decrease of 15.41%. However, with recent increases in business opportunities in the domestic market and stable growth in overseas markets, the company has a positive view on the second quarter of 2019.

VMS from 3xLogic now available in the UK