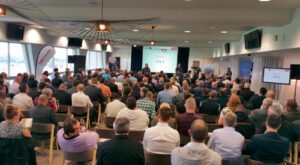 Hikvision is set to tour the UK with its next series of roadshows in September 2016. The autumn tour will feature live demonstrations of technologies and present details of how to become part of Hikvision’s VASP (Value Added Solution Partner) programme; VASP promotes training, marketing, and project support to qualified installers and integrators.

Hikvision has partnered with distributors ADI, DVS, Dynamic, EZCCTV and Norbain to bring the events to London, Bristol, Birmingham, Leeds and Glasgow in September:

Among the hands-on demonstrations and Q&A sessions, Hikvision will present the functionalities of its LPR solution. The first look includes All-in-One Blazer Express, VMS software and integration with third party LED Matrix Signs.

Win a trip to China

At each of the five Autumn Roadshow events delegates will have the chance to win the prize of a week-long trip to China including one day in Hikvision HQ, and one of 20 EZVIZ S1 Sports Cameras.

Secure a place at a roadshow here