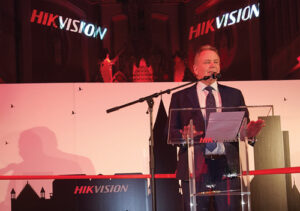 Hikvision has announced the opening of a Northern Demonstration and Training facility to support customers in the region. Based in Media City, Manchester, the demonstration facility showcases the company’s products, solutions and technologies together with the real-life benefits they can bring to both installers and end-users.

To celebrate the official opening, Hikvision carried out guided tours of the new facility running through the latest products and technologies on display which was followed by an evening event where the official ribbon cutting ceremony took place.