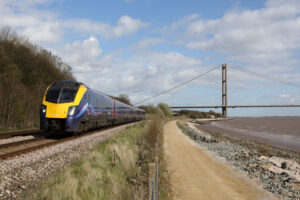 Wisenet video monitoring systems have been installed as part of a phased upgrade of the Hull Trains fleet with engineering work having been carried out with the assistance of Atkins Rail, commissioned by Angels Trains, the owner of the Class 180 Adelante fleet operated by Hull Trains.

Following on from a successful trial on a Class 180 and its five carriages, Wisenet 2MP SNV-6012M compact flat cameras and 5MP SNF-8010VM 360 degree cameras will now be installed in up to 70 train carriages. A forward facing SNV-6012M, which utilises Wisenet’s Motion Artifact Reduction technology to ensure there is no motion blur, will be installed at the front of each DMU.

“Railway related accidents are extremely rare, but we have worked very closely with Angel Trains, Atkins Rail and Hanwha Techwin Europe, to ensure that the mobile video monitoring systems are able to help us keep our passengers safe and that anyone tempted to get involved with anti-social behaviour will be deterred from doing so,” said Paul Wood, Fleet Manager at Hull Trains. “We will certainly be putting the cameras to good use. The HD SNV-6012Ms installed at the front of the Class 180 units will help us to investigate any signalling irregularities as well as safety of the line incidents such as trespass etc”.

“We have an absolute zero tolerance towards any abuse of our staff. The images captured by the cameras installed in the carriages will allow us to gather evidence that can be used in prosecuting anyone committing any acts of violence or vandalism.”

Both camera models are vandal resistant and are conformant to the EN-50121-3-2, EN-50121-4, EN-50155, EN-61373 and EN-609050-1 European standards. As such, they have been certificated as electromagnetically safe for use on trains and, with a M12 connector, are able to withstand vibrations, making them ideal for use on trains where they can be used internally to monitor passenger activity or externally, to monitor the track ahead to provide video evidence of any incident.