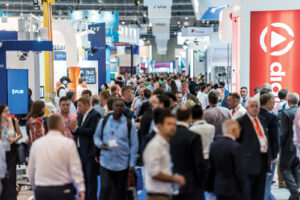 IFSEC International organiser UBM has revealed the number for this year’s event with a reported 27,658 security professionals and 578 exhibiting suppliers coming together over the three days. This is marginally higher than the numbers reported for the 2016 show (27,052) with overseas visitors representing 35% of the audience compared to 34% last year.

New for 2017 was Borders & Infrastructure Expo sponsored by Genetec. This “show within a show” featured the Drone Zone, live attack tests carried out by BRE Global/LPCB in the Attack Testing Zone, a VIP Meeting Service, the UK Home Office’s JSaRC and a dedicated seminar stream.

In the dedicated Borders & Infrastructure theatre, former IATA (International Air Transport Association) chief John Hedley argued that “we’re making life too easy for terrorists” on day one. This set the tone for the rest of the three days, with a range of seminar sessions covering a range of topics including border control, anti-terror, major event security and cyber securing critical infrastructure.

An area of the show dedicated to installers was another IFSEC first in 2017. Sponsored by RISCO, Installer World featured the Tool Zone – where, courtesy of Anglia Tools, visitors could sample a range of tools and gadgets to aid them in their jobs, and take advantage of exclusive discounts. It also brought them face to face with exhibitors such as Hikvision and Panasonic, gave them the opportunity to fulfil their shopping list with trade distributor’s Oprema taking orders onsite, hosted the Engineers of Tomorrow competition, and housed the installer specific Tavcom Training seminar theatre. And when the show wound down, visitors to Installer World were able to unwind and network with recruitment consultants in their new dedicated bar, with sponsors Videcon providing the drinks.

IFSEC International will be back at London’s ExCeL next year from 19th – 21st June 2018.

Simon Shawley is appointed by Genie