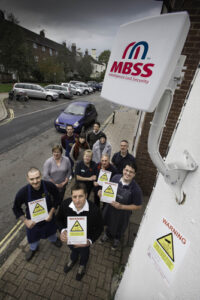 Independent traders on Magdalen Road in Exeter have had seen their campaign for CCTV security cameras realised by Marsh Barton Security Services (MBSS). The group of traders launched the campaign for new CCTV cameras on the busy road near Exeter city centre, following a spate of criminal activity earlier this year.

Many of the shop owners had been faced with smashed windows and doors, damage to the inside of their properties and repeated burglaries of items such as iPads, handbags and charity boxes. Their cry for help was heard by Marcus Di-Vincenzo, Director of Marsh Barton Security Services. When Marcus heard about the high crime rates in the area, he took action to improve safety for the whole area by installing five security cameras on the street as well as surveillance screens, all free of charge.

Marcus said: “I heard about the high crime rates on Magdalen Road and instantly wanted to help the shopkeepers and residents improve the security in the area. It’s a busy street, just outside of the city centre with many people passing through each day and night. My children also attend a school nearby and often walk this route into town; I want them and their school friends to be safe in our city.

“I contacted the traders and arranged for the CCTV security cameras to be installed in several locations on the street. They will record activity on the street for 24 hours a day, seven days a week. The cameras will act as a deterrent, to keep people away, but if a criminal is brazen enough to commit a crime, they will also supply us with CCTV surveillance footage so we can catch them in the act.”

The cameras have already proved their worth after a charity tin was stolen from one of the shops and the CCTV footage has been used to identify the individual and will be given to the Police as evidence. 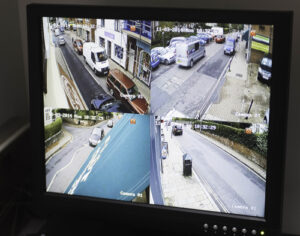 Baz Miller from The Sandwiched Inn said: “We were victim of a theft recently and the CCTV cameras have enabled us to identify the individual, something we have never been able to do before. The cameras will definitely act as a deterrent now and rather than needing to catch the criminals, we can hopefully keep them away. We are so grateful to MBSS for their help and support, without them this wouldn’t have happened. You don’t expect anyone to do something for nothing; when Marcus contacted us we all thought this was too good to be true!”

One shop owner, Annie Hargreaves of Leela gift shop said: “We are just so relieved that something is being done to help prevent crime in our area. We have paid a lot of money to repair broken windows and doors in the past and lost a lot of money. Having this CCTV will help restore the street back to how it used to be and gives me great peace of mind. It’s nice to know that people out there do care about our community.”

The team at MBSS will continue to support the traders in monitoring their CCTV footage and maintaining the camera equipment and surveillance screens.

Watch a video about the installation here: www.youtube.com/watch?v=OEVyI1IatGE