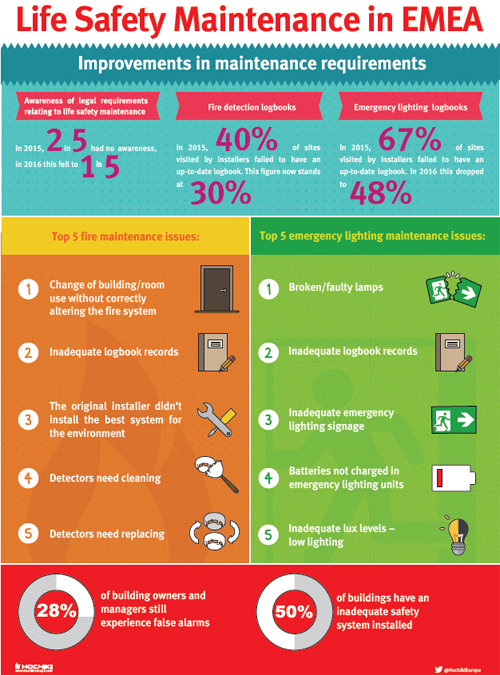 A 2016 study of European Installers carried out by Hochiki Europe has found that the number of building owners and managers unaware of the legal requirements surrounding life safety system maintenance has halved. The company’s 2015 research found two in five, or 46%, had no awareness, however that figure has dropped to one in five, or 22%, in the past twelve months.

The study also showed an increase in the number of customers installers visited with up to date fire detection and emergency lighting logbooks. In 2015, two fifths of customers (40%) failed to have an up to date fire detection logbook. This figure now stands at less than a third (30%). The number failing to have an up to date emergency lighting logbook has dropped even further, falling from over two thirds (67%) in 2015 to under half (48%) in 2016.

Despite the improvements in these key areas of maintenance, the number of building owners and managers experiencing false alarms showed little change, dropping just one per cent, from 29% in 2015 to 28% in 2016.

Equally, the number of installers encountering buildings where customers had changed the use of their spaces, but failed to adjust their life safety systems accordingly dropped only slightly, reducing from just over half (55%) to exactly half (50%). More worryingly, this year failing to update the system correctly was the most common issue installers found when visiting a customer site.

The top five fire maintenance issues encountered by installers in 2016 were:

The top five emergency lighting maintenance issues encountered by installers in 2016 were:

Tracy Kirk, General Manager of Sales and Marketing for Hochiki Europe, commented: “Our annual study shows a marked improvement in both understanding and meeting maintenance requirements among building owners and managers. This suggests that, as an industry, our efforts to educate and train those responsible for maintaining life safety systems is proving successful.

“That said, we acknowledge there are still some serious gaps to continue addressing, and while these are encouraging results we cannot be complacent. Ensuring the legal requirement for keeping up to date logbooks is met, the correct system is in place and reducing false alarms are all vital to keep people safe.”