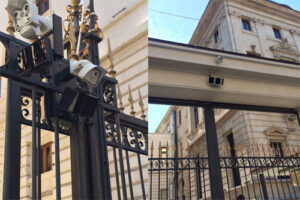 Raytec LED lighting has transformed security at a multi-site installation for the National Bank of Romania. As part of a large upgrade to an IP surveillance system, both Infra-Red and White-Light solutions were deployed to improve surveillance image quality at night, and to create a safer, more effective working environment.

Security at the bank is strict, especially at the headquarters. The perimeter and access corridors are monitored by the bank’s camera system 24/7, but previously they were much more vulnerable during the hours of darkness.

The previous surveillance system, using analogue cameras, had no professional lighting – making use of street lighting where possible. The images were dark and grainy with an uneven light coverage making facial recognition totally impossible.  It was also very difficult to raise accurate alarms based on the poor information in the images.

Working together, distributor Lantec and system integrator Rasirom specified Raytec’s Raymax Infra-Red illuminators for use around the perimeter and both internal and external access ways.  Every image is now evenly illuminated and shows clarity and detail – with no bright or dark spots. The detailed images are also helping the cameras’ inbuilt analytics to detect and analyse incidents more accurately, resulting in fewer false alarms.

“The bank is very satisfied with the night time images and reliability of the information generated by the Infra-Red lighting” confirms Radu Cristea, Lantec General Manager. “They are especially pleased that they can zoom in on any subject anywhere in the image in great detail. It’s also an added benefit that the IR is invisible and does not cause additional light pollution”.

Lantec also recognised that they could solve some of the bank’s additional security needs that extended beyond surveillance, by introducing some of Raytec’s specialist visible White-Light solutions. In particular, some of the branch cash processing centres and under vehicle check areas suffered from poor visibility as a result of little natural lighting. This made operations and inspection very difficult. To address this weakness, Raytec’s ceiling mounted Urban Bay lighting was installed in the cashing areas, along with simple low-voltage Vario lighting mounted at ground level in the vehicle inspection bays. The result is a targeted illumination delivering a brighter, more natural lighting environment which makes it easier and quicker to perform tasks more accurately.

David Lambert, Raytec MD (joint) comments: “Whilst good camera lighting is essential for night-time surveillance, lighting for people is just as important for ensuring the best safety, productivity and operational effectiveness at all times.”