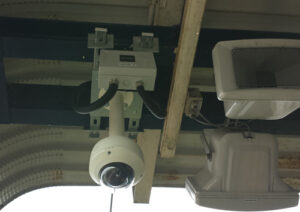 Train operating company, London Midland, has invested in IP network video surveillance technology in order to maintain a safe environment for passengers and staff at fourteen of its stations.

In excess of 300 Samsung branded WiseNetIII IP network, high definition cameras have been installed at the 14 stations by Babcock’s Rail business. Anthony Sykes, Construction Engineering Manager for Babcock said: “Key to the decision to source the cameras from Hanwha Techwin Europe, was the fact that all of the selected camera models have been PADS approved.”

The issuing of the PADS Certificate of Acceptance for the WiseNetIII cameras follows a process during which the products were evaluated and tested to ensure that they are reliable, fit for purpose and comply with Network Rail’s standards in respect of safety.

A combination of SNB-5004 box cameras, SNV-5084 domes and SNF-7010VM 360° cameras have been installed at each of the fourteen stations. Located by Babcock International to ensure that there are no blind spots, they are assisting security personnel and operations managers to ensure compliance with London Midland’s operational procedures, designed to ensure the safety of passengers and staff.

“The SNF-7010VM 360° cameras have provided a cost-effective option for monitoring large areas such as ticket offices and waiting rooms where there might normally be a requirement for a large number of standard cameras,” said Anthony Sykes. “Equally significant, the Full HD capabilities of all the cameras has enabled us to install fewer of them than we might normally expect to, as they allow us to see close up detail of any activity without any pixilation occurring in the images.

“At stations such as Watford, this has been particularly useful in areas where there are overhead electric supply lines as we have been able to be selective in where we place the cameras in order to minimise risk for our maintenance engineers.”

Depending on the number of cameras installed, one or more Samsung SRN-1000 or SRN-1670D network video recorders (NVRs) have also been supplied for each station. Where necessary, the images captured by the cameras are being transmitted via wireless technology to the recording devices. At Watford station, for example, a wireless system has provided an alternative to the commission of engineering works and the laying of cables that would have been necessary in order to transmit images captured by cameras located in the station’s car park over a distance of 800 metres to where the NVR is located.