It’s been a busy time for Elmdene International recently with the news that it has secured LPCB (Loss Prevention Certification Board) approval to mount a smoke or heat detector base on its recently launched EN54-23:2010 Visual Alarm Device  (VAD) and also that it has released a new range of Power Supply Units (PSU).

The addition of a new universal fixing plate to the ‘Type A’ VAD is intended to make life easier for those seeking to combine an indoor strobe with a suitable detector by reducing the number of device points required on a ceiling.

The Visual Alarm Device is built around low power consumption LED technology with an operating current of 46mA and has an input power range of 18-30V DC (24V DC nominal). This is not only used to power the device but also to synchronise multiple devices, without the need for any additional synchronisation or pulse circuitry, so avoiding potential issues associated with epilepsy. In addition, having the same coverage as a standard smoke detector (15m), which can be fitted to the supplied mounting plate, means that the Visual Alarm Device offers the installer a simple design method by matching devices within an area, which, Elmdene stresses, is vitally important in these early stages of implementation.

According to Elmdene, the Visual Alarm Device (FBC100-3-15) provides coverage in line with EN54-23 to C-3-15, which means it is a ceiling device with a maximum ceiling height of 3m, providing a 15m diameter cylindrical volume covered by the light radiated from the built-in strobe. The thinking behind adopting the C-3-15 configuration is, the company confirms, to ensure that the design of an EN54-23 compliant solution is as straightforward as possible. For smaller areas or where current consumption may be limited there is added flexibility to switch the beacon to C-3-12 coverage if required (from 15m to 12m), reducing the device’s current consumption by 10mA. As well as a fixing plate to offer the option of attaching an approved detector, an aesthetic blanking plate is supplied should the detector not be an installation requirement.

Ian Moore, Managing Director at Elmdene said: “We are delighted that our Visual Alarm Device has achieved LPCB approval in line with EN54-23, including most recently for a universal detector mounting plate. In fact during testing it actually surpassed our claimed C-3-15 coverage.

“Basically, with the Visual Alarm Device we are keen to simplify things for specifiers and installers when it comes to deciding how many strobes they should fit to satisfy the minimum light coverage requirements of EN54-23; which cannot be done with ‘Open Class’ strobes as every manufacturer’s strobe coverage could be different. The reality is that this is still proving to be a challenge as the industry becomes acquainted with the standard so, in my view, anything that can address this has to be welcomed.” 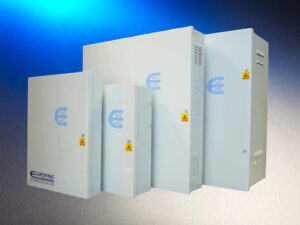 Elmdene also announced this week the launch of its STX range of PSUs. The range has been designed to meet the demands of today’s EN54-4 compliant fire systems and is the first product line from Elmdene to come, as standard, with its EcoCharge battery charging capability.

The range comprises four power variants – 1A, 2A, 5A and 10A – each delivering a 27.6V dc output. All the models in the STX range are certified to EN54-4:1997, A1:2002 and A2:2006. According to Elmdene, in-house testing has demonstrated that the latest STX PSU models are capable of delivering efficiency levels of up to 95%. This figure is approximately 5% above the company’s previous EN54-4 offering, and compares favourably with the markedly lower 50 – 55% efficiency levels typical of many PSUs that are still operating with linear technology.

Ian Moore said: “We believe that with certification to EN54-4 and the features built-in to the STX range – from switch mode technology to our own EcoCharge functionality which brings a considered approach to battery charging – that these new models are well placed to grow our presence in the fire system PSU market.”

Partnership for Securi-Guard and Blackline