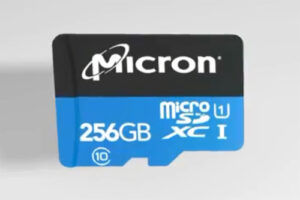 Over 98 percent of all microSD cards sold globally in 2017 were used in consumer applications, according to IHS Markit. These consumer-grade memory cards are not designed and validated for commercial use in video surveillance applications. Micron’s industrial microSD cards are designed for professional video surveillance use cases and include a three-year warranty for 24×7 continuous video recording usage. The Micron microSD card design and firmware is optimised to ensure a robust and low-maintenance system design that delivers 24×7 continuous recording capability with minimum video frame drops.

“Due to a lack of surveillance-grade solutions, organisations have relied on the use of retail microSD cards that are not optimised for 24×7 recording. As a result, these cards may fail earlier and also experience video frame drops as high as 30 percent,” said Amit Gattani, senior director of embedded segment marketing at Micron. “With a strong industry trend toward more analytics and artificial intelligence (AI) in surveillance cameras, there is a growing demand for higher reliability and higher density storage in the cameras. Micron is addressing this need with 256GB in a surveillance-grade microSD card.”