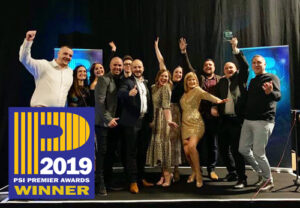 The winners of the PSI Premier Awards 2019 campaign were announced this week at a packed evening event in Manchester.

Over 240 guests from across the security industry saw PSI Editor Andy Clutton and the guest speaker, television presenter Penny Smith, announce the winners as voted by security installers, recognising innovation, service and support from manufacturers and distributors. This year the winners were chosen by a record number of voters after the list of finalists appeared in PSI magazine.

The results were revealed as:

INTRUDER PRODUCT OF THE YEAR 2019 Pyronix – Enforcer V10 with ProControl+

The winner of each of the above categories was decided by the number of installer votes received. For the winner of the sixth category, the votes accounted for 50% of the result with comments from customers making up the remainder. The winner was:

DISTRIBUTOR OF THE YEAR 2019 Oprema

The winner of the final category was the finalist from across all of the various product categories which received the highest number of votes overall. The winning technology was:

Congratulations to everyone who took part and well done to all of the finalists.

For more information see the December 2019 edition of PSI magazine