Pyronix hits the road on a European tour 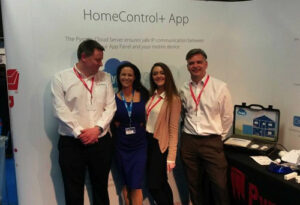 It’s been a busy year so far for Pyronix after a few months on the road meeting customers and showcasing the Enforcer HomeControl+ App Panel, set for release in June.

The tour started in Birmingham at the NSI Installer Summit, at the National Motorcycle Museum on 10 March. NSI approved companies are invaluable to the company and as Simon Banks, Director of NSI, said: “The NSI Installer Summit provides approved companies with essential business advice, focused education and an exhibition of product innovations, all within a single compact event. The Summit acts as a taster menu for IFSEC 2015 which is set to offer installers even more, with a dedicated Installer Live Zone.”

Next up Pyronix crossed the Irish Sea to Dublin for ISEC 2015, at the Convention Centre, Citywest Hotel, between 25 and 26 March. ISEC is Ireland’s biannual security and fire exhibition and provided another important opportunity to meet customers.

Organiser Ann Daly, said: “Without exception every exhibitor left Dublin very weary and foot sore, but also excited, not only at the connections they made with their current customers, but at the large amount of new prospective quality customers that they came in contact with over the two days.”

The company then showcased at BSIA Manchester Security at the Bridgewater Hall on March 26. This conference and exhibition brings businesses from the North West region together with local Police, to discuss security challenges they face and the solutions available to combat issues such as crime and anti-social behaviour.

Next stop… IFSEC in June!

Distributor DVS is acquired in MBO