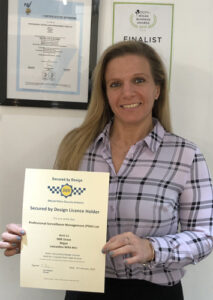 Wigan-based Professional Surveillance Management (PSM) is claiming to be the first remote monitoring CCTV company in the country to have achieved Secured By Design (SBD) Police Preferred Specification.

Within days of the award being issued to PSM this year the company proved why it was worthy of the accolade by helping to deter a break-in at a local business park. The incident began when PSM spotted a person trying to cut through the main gates of a North West business park with an angle grinder. The first response was to issue an audio warning alongside notifying the police and the key holder for the business park. The intruder decided it would be unwise to continue with the break-in and fled the scene without gaining entry.

Kerry Jones, CEO of PSM, said: “The intruder could have caused devastation for many businesses and their premises without our surveillance. Luckily the owners recognised the value of bespoke remote monitoring services, not only for themselves but also for the businesses based at the park. Not a day goes by without our audio warnings challenging trespassers and potential criminals, forcing them to abandon their plans of attack.”

Firexo admitted as full member of the FIA