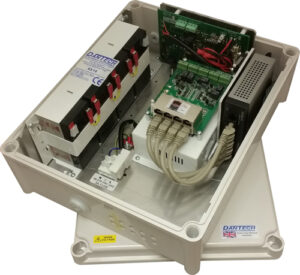 What are the benefits to be gained by using separate PoE power supplies and Ethernet transmission devices for IP based security systems? According to Dantech Electronic Engineering the answer is extended reliability, system continuity, accessibility, compliance and physical security.

According to the company, the deployment of separate security application specific power and Ethernet transmission devices, versus the use of ‘off the shelf’ generic IT application products, negates the potential problems to be incurred with combined PoE and Ethernet switch units. It is important to consider that combined IT industry products’ power outputs may have an unspecified ‘power budget’, limiting the defined output power to a specified ‘total’ figure, rather than being able to provide their published full capability across all outputs. This can manifest itself with load devices being connected with insufficient power available. With some generic IT supply products, it is possible to overload the integrated power supply, resulting in a shutdown of all outputs until the overload is removed. As some common security devices have variable power consumption, there is a risk that these will appear to function normally, until loads demand higher power levels causing system shutdown. While convenient, the use of integrated power outputs for mission critical operations is highly questionable. Only the use of separate security application specific PSUs will guarantee system reliability and performance.

Other issues to consider include the fact that IP security devices such as surveillance cameras tend to ‘reboot’ following a power interruption, for a period that may range from 30 – 90 seconds. The use of a dedicated battery maintained power supply local to devices will ensure seamless operation. The prevention of device reboot downtime makes a powerful case for the use of battery-maintained power supplies in all IP security applications, as does the continuous provision of functions like edge storage, door entry and call-point access, regardless of mains and network state.

The choice of conventional vs. PoE power is often debated. Both methods are valid. Whichever is used, with the consideration of minimising losses, separating power from Ethernet switching, removing failure points and spreading risk between multiple power supply units will be rewarded with long-term reliability.

“From experience, we know that it is far more reliable to use power supplies separate from network transmission equipment”, says Tim Scott, Director at Dantech Electronic Engineering. “PSUs have a conversion-efficiency loss, which is dissipated as heat, potentially affecting the operation of other equipment. Separating power provision removes single points of failure, reducing both the likelihood and the magnitude of failures. Also, good dedicated PoE power units have higher life expectancies than switching equipment. With IT industry PoE devices, it’s important to understand that their output ports could be susceptible to being switched off, either by accident or maliciously via the network, whereas devices designed specifically for security applications will remain secure.

“Today, the benefits to be gained from IP network integration no longer need to be at the expense of system security. Secure, reliable power for mission critical security systems that integrate with fully with modern IT networks – whilst not being susceptible to network control or attack bring the added benefits of secure, monitored, ‘any location’ installations and various battery standby options, allows the design of better performing, more secure systems. So now, networking products can be confidently specified by security experts to work seamlessly with IT products.”

A breath of fresh air for the UK?

The role of the PC in the CCTV system