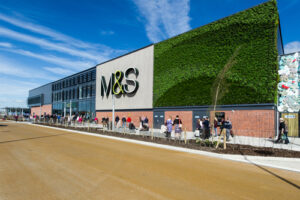 Protecting its customers and staff by providing a safe and secure shopping and working environment is important to the company providing transparency and consistency throughout its operations. Added-value benefits have also included cost reductions, for example through value management and rationalisation of CCTV systems against their need and purpose. A reduction in the installation programme has additionally saved costs and minimised retail disruption.

The certification, awarded by the Surveillance Camera Commissioner, follows an audit conducted by SSAIB’s Lead Assessor Stephen Grieve, which covered all of Marks & Spencer’s operations, from its head office through to distribution centres and retail stores. In practice, it means that the company has been found compliant with the twelve guiding principles of the Surveillance Camera Code of Practice (in accordance with the Protection of Freedoms Act 2012).

M&S’s Head of Corporate Security, Clint Reid, worked in partnership with Four Security Consultants to meet the certification standards and comments that he is “optimistic about the potential improvements in protecting our people and working environment that gaining the SCC CCTV certification will bring”.

Brendan McGarrity, Head of Four Security Consultants, adds: “We praise the vision and tenacity of Clint and his team in realising the importance of gaining this certification and the hard work they put in, helping us achieve it with them. This move has significantly raised the profile of CCTV within M&S and is an important source of operational information. The increased awareness of M&S’s surveillance capability, together with the quality of its CCTV equipment, has resulted in managers being more willing to use the data to help them realise operational and commercial benefits.”

Meanwhile, Surveillance Camera Commissioner Tony Porter notes that: “For a retailer of Marks and Spencer’s size to achieve full certification against the Code is no mean feat at all! They are not required to comply with the Code and have done this voluntarily, which makes it all the more impressive. Working with Four Group and SSAIB they have been able to demonstrate they comply with the Code across their vast estate. If an organisation of this size can achieve certification there’s no reason why anyone else can’t and shouldn’t.”