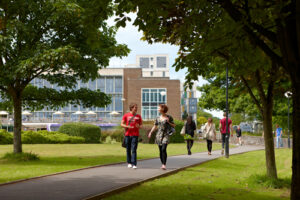 CriticalArc has announced that its SafeZone personal protection and campus security system has been selected by Swansea University to boost 24/7 safety for its students and staff both on and off campus.

Swansea University has more than 19,000 students, including many international students, studying on a range of courses supported by just over 3,000 staff (includes academics).

SafeZone will be deployed at the two principal campuses ie the Singleton Park and the Bay Campuses as well as seven other sites frequented by students and staff in the Swansea Bay region, where it will offer enhanced protection for any staff and student when they are at risk or need urgent help. It will meet the need of the campus security teams to support an increasingly round-the-clock learning culture that offers safe 24/7 access to libraries, study hubs and other facilities.

A major benefit will be the creation of safe ‘corridors’ between each campus, its halls of residence and popular destinations such as the train and bus stations.  Additional monitoring and response cover along these thoroughfares will offer extra protection for people walking alone late at night. SafeZone protection will also extend to designated areas off campus, for example, for individuals on field trips, research projects or international placements, anywhere in the world.

SafeZone will equip the University with a people-centred safety solution plus an effective distributed command and control platform for managing response and mass communication during small or large-scale emergencies. All staff and students will be able to download the free smartphone app that makes it easy for them to raise a location-based alert at the touch of a button, so eliminating potential language or communication barriers.

Darren Chalmers-Stevens, from CriticalArc said: “The team at Swansea University share a similar vision for real time situational awareness to us and have a great vision for the solution to include collaborating with local authorities and private organisations for a smart city which is envisaged will lead to further safety and security initiatives that will benefit staff and students alike. We very much look forward to a close working relationship with Swansea University.”

Russ Huxtable, Head of Resilience & Business Continuity at Swansea University said: “We have implemented an integrated security strategy for our University in order to provide, as far as practicable, a secure and safe environment for those who use, study or work at the University. Using SafeZone to ensure a consistent security approach across our campus locations and beyond will provide an extra level of protection to give all students and staff added peace of mind.”