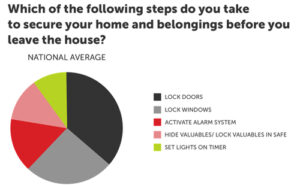 A third of us would do nothing to help our neighbours if their burglar alarm goes off, a survey commissioned by Direct Line Home Insurance has revealed. In fact, nearly 1 in 6 will totally ignore it in the hope it will stop on its own. The survey crowned London respondents as the most ignorant to a neighbour in need, with nearly 40% saying they’d ultimately do nothing to help. According to survey results, you stand the best chance of having neighbours you can count on if you live in Wales.

The survey, which examines the current state of home security in Britain, also found 18% of us still don’t lock our doors when we leave the house, despite figures from the Office for National Statistics showing a +6% rise in recorded domestic burglaries.

The report showed that people living in North East England take more basic burglar prevention measures than anyone else in Britain, even though – compared to other regions – residents here aren’t hugely likely to be affected by burglary. London is far more likely to be affected, but surprisingly, they take among the least precautions. Scotland seem to be the most carefree – but they have reason to be, since residents there are the least likely in Britain to be affected by burglary.

Around a quarter of survey respondents have smart alarms, with the East Midlands leading the smart alarm revolution. Around 1 in 10 say they check in on their home security more than once a day – a luxury allowed to some smart alarm users – but 45% never check in while they’re away from home.

The majority have unmonitored alarms that sound a siren or flash if set off. 46% of those with traditional alarms say they’re not at all considering a smart upgrade. Only 13% are seriously considering it. On average, nearly 10% have no security system fitted at all.

When asked what motivated them to install their current security system:

Linux OS NVRs with up to 32 8MP channels