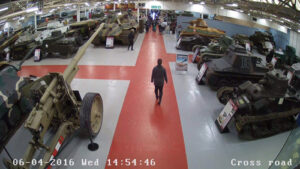 The museum of the Royal Tank Regiment and Royal Armoured Corps is a collection of tanks and armoured fighting vehicles. It’s an exhibition that includes the world’s first tank – Little Willie, the feared German Tiger tank – and the modern Challenger 2, all housed in one of six expansive halls.

A recent Heritage Lottery Fund grant has doubled the museum’s size and with expansion came the need to install CCTV to keep the collection secure and visitors safe.

Located near an army base, security is also a top priority. The technology had to be scalable and implemented swiftly to meet the museum’s needs. Roy Hicks, museum facilities manager, explains: “We needed a complete overhaul of our outdated analogue CCTV equipment. Fifteen cameras to oversee such a large area was not nearly enough, but with Hikvision’s range of products we now have a view of every part of the museum.”

Hikvision partner Ashley Security installed the new IP cameras across the facility. The company planned every detail so that visitors were not disturbed during the implementation process, which took place during opening hours. It took less than two months to fit 54 cameras and systems.

Yann Maciejewski, engineering manager at Ashley Security, helped the Museum with its bespoke security system. He said: “The Tank Museum’s security team had concerns about the quality of their existing CCTV equipment and its inability to playback video quickly and easily. We custom-built a system using Hikvision’s range of products.”

Hikvision’s IP PTZ cameras provide 1080p HD for image clarity while the NVR software programme records video in a digital format to a disk drive, USB flash drive, SD memory card or other mass storage device. This means all recorded content is stored and available to view easily, which was an issue with the old equipment. Instant playback via a mobile device gives the Tank Museum security staff access from anywhere.

Roy adds: “Access to instant playback of videos and images from my mobile phone has made a huge difference. I now know that it doesn’t matter where I am, if I need to check on anything suspicious I can do it easily.”

Relocation to Widnes for Radium Security