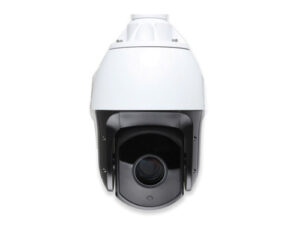 This Concept Pro IP66 IK10 rated speed-dome is based on the Starvis 1/2.8” CMOS sensor, giving a 2MP (1920 x 1080p) image with a 20x zoom lens and in-built infrared illuminators with a stated range of up to 150 metres. A 30x zoom version is also available. The camera provides outputs for all the main analogue HD formats such as AHD, CVI, TVI along with the digital over coax SDI standard. An optional function box is available that allows IP network connection of the dome.

This unit has its PTZ and telemetry control elements within the main body of the dome but external connections and configuration switches are on a separate function box that sits within the “swan-neck” wall-mounting or straight ceiling-mounting box. This means that for the wall mounted version, the dome can remain undisturbed if changes are required to address settings, alarm input / outputs and video connections. Optional corner and pole-mount brackets are available.

All connections between the function box and the dome circuitry are by way of a 14-way cable with in-line connectors at either end. Power into the unit can be either 12v DC or 24v AC (38 or 43W).

Expanding wall fixings are supplied and a drilling template is provided for accurately locating the holes. With the wall box placed onto the wall bolts the box is then secured by fitting the four nuts and their flat and split locking-washers using the supplied 10mm wrench. This is likely to be a tricky operation to fit the washers as the box’s mounting holes are 70mm deep and only 20mm in diameter. It was noted that the manual’s installation image does not identify the washers as being used.

With the box suitably mounted, the dome module can be clipped onto a short lanyard allowing it to hang in place while the 14-way connector is inserted into its mating socket. The dome can then be easily fitted to the upper bracket by inserting its three Allen bolts into their keyhole apertures and rotating into the held position. These are then secured using the supplied Allen key.

The analogue function box has two eight-way switch banks, one for setting configuration and the other for telemetry addressing. The dome accepts Pelco P or D protocol and can be addressed from 1 to 255. Coax line control is supported from compatible recorders. The configuration switches allow for Baud-rate, HD output format, frame rate, PAL/NTSC and RS485 line termination.

When powered up, the dome outputs a rather odd “Welcome use” message prior to showing the camera image with an on-screen display of the default configuration settings such as video format, Baud rate and camera address. At first use the camera fully zooms in at the end of its calibration routine but subsequently calls preset 1 once this has been stored, though other power-up actions can be programmed.

If the alternative IP function box is installed, the unit has DHCP addressing set by default with a defined address for non DHCP networks. A simple administrator password is given as a default and there is no forced requirement for a strong version.

At power-up, the IP address of the IP function box is displayed in the top left corner of the analogue output image. This proved to be difficult to see with an SD monitor as it was mostly above the image displayed but with SDI or AHD/TVI outputs was easily identified. A “discovery” tool is available from the supplier if required.

‘Cheaper’ #cameras can always be found, but the true cost of doing so not always understood...
#security #securitynews #securityintegrator #cctv #surveillance
http://ow.ly/hPlF50zQ6Ny