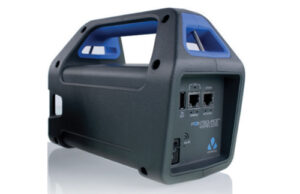 The Veracity Pointsource Wireless is the latest version of this item of test equipment for engineering use when installing PoE powered IP cameras. It is promoted for such applications as:

The unit is very well designed with a large carrying handle forming the upper part of the casing. Metal bars at either end allow the supplied shoulder strap to be easily fitted and removed.

The front panel is clearly laid out with from top left to right:

Beneath these sockets are an On/Off rocker switch and an adjacent Wireless LAN indicator.

Prior to first use it is necessary to fully charge the battery pack; this will help maximise the life of the battery which is stated to be about three years or 200 to 300 charging cycles. The plug-in charger can accommodate one of four supplied adaptor plates to suit UK, US, EU and AU socket types.

Charging time is stated in the Quick Start Guide as being from four to eight hours typically with a red LED status light on the charger changing to green when the battery pack is fully charged. In practice it took around eight hours for the power supply to indicate that a full charge had been reached. It was then noted that the charger stated six to twelve hours as a likely charging time so this is probably a more realistic range.

With the battery pack inserted into the device, the unit was turned on. As expected the blue WLAN indicator started flashing after 15 seconds and became constant after just under 90 seconds.

Connecting a PoE enabled camera to the camera RJ45 port illuminates the PoE LED to show that a connection has been successful. 49.9v dc was measured between the orange and green pairs showing that this made a Mode A (Endspan) connection to the powered device.

Connection of a wireless device is simply a matter of finding the Veracity SSID on your device’s list and entering the default password to gain a connection.

Specific applications are available via the usual online sources for download to mobile phones and tablet devices however, you may need to ensure that any mobile device has suitable stream decoder drivers installed in order to view the installed cameras. A laptop PC may prove more flexible in this regard.

Once running the App will search for any connected cameras and display these as a list view or as a series of thumbnail images depending on configuration setting. In the case of a single PoE camera connection then just this camera will be available. Clicking on an available camera brings up a menu of settings and options for the camera. From here the user name and password for the camera can be entered and there is an option for these details to be “remembered”. Once such settings are entered, “View Video” and “Visit Webpage” are the key options to view the live image from the camera and to access its configuration menu respectively.

With the device connected to a network a wireless-connected tablet displayed the message “ensure the network contains no more than ten devices” so this appears to be the limit of the number of addresses that the internal Access Point interface can handle.

The Pointsource unit has a fixed static IP address of 10.252.252.1 for the wireless access point, the network interface can be set to DHCP mode through the “Wired Network” configuration option in which case it will take an IP address from the host network’s DHCP server or a static address can be entered.

For added security it is advisable to ensure that the device password is changed to prevent any unauthorised access to any part of a customer installation if a connection to the network is made.