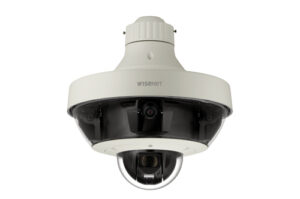 The Wisenet PNM-9320VQP is a relatively large assembly that can house up to 4 fixed camera modules for wide area coverage and with a PTZ camera beneath fitted with a 32x zoom lens of 4.44mm to 142.6mm. The wide range of fixed camera modules means that the camera can cover a full 360° field of view or 4 specific narrower views to suit the surveillance requirement.

The unit has an IP66 environmental rating and impact protection to IK10. Its operating temperature range is from -35° to +55°C. Maximum power is stated as 65W (PoE).

It should be borne in mind that while this unit can provide full 360° coverage if the wide-angle modules are fitted, it does not provide panoramic views but is intended to provide flexibility of coverage to suit various scenarios.

Before fitting the camera assembly to its mounting bracket, it is sensible to fit the up to four optional “lens” modules. These are simply clicked into place after first ensuring the connector is aligned correctly. Even working at ground level, it was found that one of the four modules had not connected correctly even though it appeared to have clicked into place. This resulted in no image from that module but removing and re-inserting the module corrected the problem. Power must be turned off when removing or fitting these modules; the manual states that there is a local power switch accessible under the “SD card door” in the side of the top bowl however this switch was not present on the unit tested. Each of the modules had to then be rotated by 180° to get the pictures to the right orientation.

At just over 7kg, the assembly is quite heavy so care must be taken when manoeuvring the unit for setting-up and pre-configuration. The casing has a diameter of approximately 368mm x 382mm in height.

The User Manual states that the install site must be capable of supporting at least 5 times the weight of the product so a mounting capacity of over 35kg is required and with limited deflection if pole mounting.

Power is supplied by H-PoE; an 83W Gigabit PoE injector is supplied with the product although this included just a European (Type F) plugged IEC connection lead. The injector allows for power and network data to be connected through a single Cat 6 lead. Alternatively, an SFP connection socket is included in the top mount (called the installed base) and this allows a direct fibre network connection to be made for longer distance transmission with the injector then used for power supply only.

When initially powered up, DHCP is enabled by default and the “IPInstaller” software supplied on the CD can be used to identify the camera on the network allowing a static address to be entered and saved.

Connecting to the unit with one of the main browsers gives access to Live views from each of the cameras along with a Replay facility (if SD cards are fitted) and the Configuration set-up menus. Good results and live images were obtained with Edge, Firefox, Chrome and IE11 browsers on Windows 8 & 10.