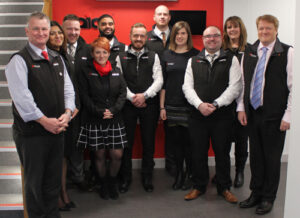 Aico has announced an expansion of its sales teams following record growth in 2015. Aico’s network of Regional Specification Managers (RSMs) has been expanded to include Chris French for South East, Lewis Roberts for South London, Tina Mistry for North London and Dan Thomas for Wales and Borders.  Aico RSMs provide national coverage and support for Housing Associations and Local Authorities, and electrical contractors working for them, driving the specification of Aico alarms.

A more recent addition to the sales structure, Aico’s Regional Distribution Managers (RDMs) have proved effective in providing support for wholesalers in the form of training, education and in-branch merchandising.  It has been strengthened through the addition of three new members: Tony Masson as RDM for Midlands and East, Carl Connelly as RDM for London and South East and Andrew Sturgess as RDM for South Wales and South West.

Aico’s Sales Support Team, based at its head office in Oswestry, has also been expanded to provide support for all aspects of the sales operation and to work with the larger RSM and RDM teams.

In addition to the new appointments, former RSM Stephen Paskell has been promoted to join James Cavan as National Sales Manager.

Honeywell to acquire Xtralis for $480m