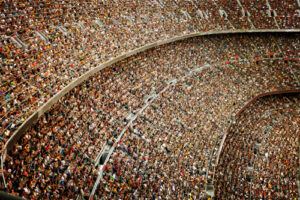 A new blog from IDL discusses what crowd control in crowded areas such as sports stadiums might look like in the future.

In the immediate aftermath of the tragic events in Westminster, and with London on high alert, enhanced security was deployed at Wembley Stadium to help ensure that England’s game against Lithuania could be played with minimal risk. The increased security took the form of hundreds of additional armed officers and bomb-proof vehicles located on the streets around the stadium, and fans were told to arrive as early as possible due to the time it would take them to pass through the heightened security screening inside the stadium.

Wembley had to act rapidly to increase security and fans were already committed to attend, so the additional time it took to clear the heightened security was accepted. But, how would fans feel if this became the usual security process when attending a match? In the longer term, people might decide that it’s easier to watch the game on the TV at home.

Roger Cumming, Director at Fenley Martel, comments: “The purpose of security is to allow people to go about their daily lives freely and with confidence. Freely means not interfering with them unnecessarily – not asking them to remove jackets or empty pockets. With confidence means that they can go into a sporting venue, for example, and not feel worried that the person next to them might be planning a major attack. Although people like to feel safe, they don’t like to feel that their lives are being inconvenienced or disrupted by security, so measures need to be as unobtrusive as possible.”

No smoke and mirrors please!