The visual advantage from VSD 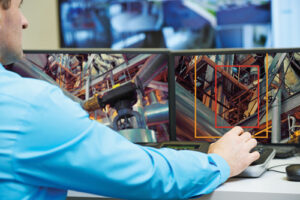 Video smoke detection (VSD) provides the security and fire safety industry with a way to detect smoke and fire in a very early stage. Here we look at the benefits of the technology

VSD makes use of CCTV security cameras and video analytics that are able to recognise initiating smoke and fire in the video image. Today, VSD is especially used in critical infrastructures in order to protect people, property and production processes. It technology can prevent serious fire incidents from happening and thus avoid high costs, including the cost of fire damage to infrastructure, of human lives and of production stops during an alarm phase.

“In certain types of critical environments, like chemical plants, waste storage bunkers or production facilities, the impact and the risk of a fire can be very high. That’s why companies operating in such environments need to take the appropriate fire safety measures. However, it is exactly in those environments that conventional smoke detection technologies, like beam or point-type detectors, will fall short,” says Pieter Claerhout of Araani.

“First of all, conventional smoke detection systems, like point, beam or aspiration-based smoke detectors, need to make contact with the smoke before they can generate an actual alarm,” he explains. “But in the typical high buildings of chemical plants, production halls or storage rooms, the smoke from an initiating fire will reach the smoke detector very slowly, too late or not all, because of a process called stratification, which stops the upward movement of smoke.”

How does VSD work?

Today’s video smoke detection systems rely on the resolution and accuracy of a standard network security camera. Software algorithms installed on the camera scan the environment and continuously analyse it in real time to locate the fire incident. In case of an event, an alarm output is sent over to the fire control panel. A video detection system can be connected to a video management system in order to provide control room operators with 24/7 situational awareness.

According to Pieter this approach has a number of advantages: “Video smoke detection systems will see initiating smoke much faster than conventional systems. VSD makes efficient use of CCTV so it is able to see dangers at source, from a very large distance. Unlike some other smoke detection technologies, video analytics do not need to make physical contact with smoke or dust. They immediately ‘see’ the danger when and where it originates.

“VSD is also very accurate and thus the false alarm rate will be extremely low. Unwanted alarms can be very costly. Just think of the time lost when a production line needs to be stopped or imagine the cost of an erroneously called emergency team. Video smoke detection systems on the other hand will analyse the video image to make a distinction between starting smoke and other irregularities, such as people walking in the field of view, animals, vehicles or objects.”

Control room operators can monitor the CCTV video images in real time. This allows them to assess the nature and severity of the fire as well as the stage it is in. Based on pre-incident recording, they can see whether people are present at the place of the incident and they can better assess the overall situation. This way, they can also make better use of their emergency resources.

When to use VSD

“VSD technology proves its value in environments where contact-based smoke detection systems are not efficient, including high-impact environments, harsh environments, and buildings with great height,” says Pieter. “In some environments, such as chemical plants, even a small fire can cause huge consequential damage. In these high-risk environments, conventional smoke detectors would be useless, because they might only get activated when the damage is already done. VSD on the other hand is so fast that it will efficiently reduce the impact and the risk of a fire outbreak.”

Video smoke detection is also ideal for use in tall buildings or large indoor spaces. High or voluminous buildings of 10m+ have issues with the stratification of smoke whereby smoke will not rise high enough or quickly enough to reach ceiling mounted point or beam detectors. This is the case for example in aircraft hangars, airport passenger terminals, factory production halls, retail areas, museums and historical buildings.

In production facilities, alarms will require the production lines to be stopped. In harsh environments, where chemicals, dust or vapor are present every day, such as chemical plants, waste recycling plants, wood processing companies or in the oil and gas industry, conventional smoke detectors could generate false alarms. But, because of its visual nature, video smoke detection will be able to analyse the above-mentioned phenomena in a more intelligent way through the use of video analytics.

“Video smoke detection is a perfect fit for a wide range of critical environments,” says Pieter Claerhout. “Because of its visual nature, VSD can spot initiating fires directly at the source, practically from any distance. This is a huge speed advantage compared to smoke detection technologies that need to make physical contact with the smoke. With VSD, there is no need to wait until the smoke has reached the ceiling. This is time gained for anyone who needs to make tough decisions about the required actions that need to be taken to avoid further fire and smoke damage.”

Unwanted alarm or not, probably the biggest advantage of video smoke detection technology is that it gives the operator room for interpretation. Since it is so fast and allows for visual verification, VSD provides the operator with valuable time to make a well-founded decision. That decision could be calling the emergency services and avoid further damage or human suffering. Or it could be ignoring the alarm and if possible isolating the fire event in order to prevent the entire operation to close down and run into costs.