Think you know about IP switches? 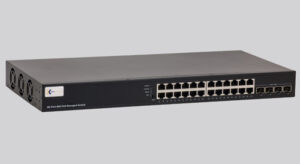 For many years, the trend in CCTV has been to convert and integrate existing analog CCTV systems into IP networks. According to Barox, that trend is accelerating, however a new trend in IP is emerging, one that demands careful consideration.

Relating to PoE technology, the latest IP cameras are requiring more and more power to be supplied via network switches. A 60-watt network device is no longer a rarity, but network designers face limitations in their choice of available switches that can cope with that demand. High PoE and fast Central Processing Unit (CPU) performance are difficult to combine, as high power produces a lot of waste heat – which is not conducive to CPU performance. In addition, the IEEE standards for 60W are not yet completely ratified. In short, it is becoming apparent that the world of video IP networks is forging ahead with an independent existence, with the requirement for its own specification of high-performance switches and components.

When an IP camera is streaming its contents, its video frames need to follow continuously and as steadily as possible, otherwise the eye immediately perceives the change. So in comparison to the needs of traditional data networks and due to the synchronous nature of high-resolution video streams, to cope with the needs of modern IP cameras, video IP network switches need to be powerful, dynamic and fast.

Also, megapixel cameras are on the rise, and they output even larger ‘jumbo’ video frame content, often around 9600Bytes, that’s up to six times larger than normal frames with 1518Bytes. So for installers of video networks, the problem they face is that most network switches only support frames with a 1 Gigabit connection, but IP video cameras negotiate at a speed of 100Mbits. As a result, the switches discard the jumbo frames and data is lost. This is how green/empty frames are created. The complexity of video networks is increasing rapidly, so cameras and switches must be better matched to provide camera integration and high-quality surveillance monitoring.

Megapixels, 4K, 8K… The direction of camera development is clear to see and in the future we’re heading towards the need to cater for even greater data rates. The recent move from H.264 to H.265 brings only a short reprise to the heavy bandwidth issue. Because H.265 increases the High Frame Rate, in turn there is a huge increase in data – so the choice of switch is an eminently important consideration for the successful transmission of uninterrupted high-quality video.

Although a switch might be labeled as 24 Gigabit, the question to be asked is: Can it handle that amount of data? Conductivity is determined by the so-called switching fabrics (SF). A switch with 24Gbits has twice the SF i.e. 48Gbits. A comparable criterion for evaluating a switch is the forwarding rate (FR). Many access switches and Top Hat Din rails are exempting switches, not built for Full Wire Speed ​​on all ports, because switches in the industrial world are usually only needed for small amounts of data. For example. from PLC control to PLC control. When video is connected to these switches, the device is overwhelmed.

Another consideration is the bottleneck uplink. For a switch, this should also be designed for video. As an example, a 24-port 1/100/1000TX switch must be used with a minimum uplink of 10Gbits.

Why buy a general purpose low cost 24 Gigaport switch when it is bound to fail when all 8 ports are occupied, and a second or even third switch then becomes necessary?

IP cameras behave quite differently compared to other PoE devices. For example, on day/night switching current peaks are generated, or when PTZ domes are moving there is a short-term increase in power demand. In these situations, the network switch must be able to cope with the demand and not fail.

Typically 75% of the switch power is used purely for PoE, the remaining 25% is required to cope with peak currents and for the switch CPU. So for example, a 24-Port Switch with Class 3 consumers equates to 24 x 15.4W = 370W. However, effectively the switch needs to be specified as 370W / 0.75 = 500W, i.e. the remaining 130W is needed for the reserve of peak currents/switch CPU.

In the event of a power failure, a fully featured video switch is able to time-delay port-by-port. Otherwise all cameras would receive peak power at a stroke. Example: All Domes are required to preset to their Home position at the same time, this generates enormous peak currents, which impacts the power supply again and again. At the same time, modern video browsers are required to be able to ‘ping’ the PoE devices directly and, if necessary, remove the PoE supply to successfully reboot cameras.

Age and size – hindrance or opportunity?

What does 2019 have in store for security?