Thinking positively about the future 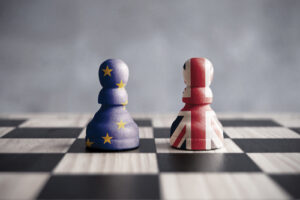 Despite all the leaving the EU uncertainty at the moment, security technology companies are continuing to invest in the UK as they recognise the strength of the sector and the potential business out there

Let’s get one thing straight before you get into the main body of text on this one – PSI is not a political magazine. Don’t phone me wanting to discuss the inner ramifications of Tory policy or Labour’s approach to spending; we don’t do that one here to be honest. Sports is certainly a topic we’d be happy to talk you through (the day we can change the ‘S’ in PSI to mean sport will be a glorious day) but until then it’s security all the way. But just in case you were wondering it’s Man City for the league, Wilder to beat Fury, Usyk to beat Bellew and Tranmere Rovers for the FA Cup (we can all dream).

So back on politics, the subject of Brexit is never far away from news headlines these days and whether it is people wanting a hard, soft or slightly chewy Brexit, a second referendum or the quickest possible end to the whole thing, it’s all still up in the air as to how and when we leave and what we take with us when we go. Which is why it is all quite disappointing to constantly be reading the doom point of view in the papers rather than a balanced opinion. Yes of course the media outlets all have a political agenda so that’s how they will roll, but it’s a stream of negative reporting despite the public vote to go. No reflection of the general mood, seemingly just a reflection of the loudest (and often remainer-funded) opinions being voiced.

According to recent stories some of the changes we ‘might’ see due to Brexit are a loss of British Summer Time, no air travel, no food, no utilities, no imports/exports and no Ryder Cup.

Despite all of this doom-mongering it’s great this month to see Optex, Vimpex and Dahua opening new UK premises with Hikvision proposing a new UK R&D facility for 2019. The UK security market is clearly in a good place regardless of what remain-leaning news outlets tell us. The security industry is technology-led so it will always be evolving and it will always be growing.

We are a nation that sits high in the target market areas for suppliers, distributors and manufacturers, so don’t think for one minute that the bottom will fall out of the industry just because we have to set up new trade deals. Cleverer people than me (of which there is a fair number) said that whichever way the referendum went would be OK for the security industry because we are in a strong sector even with uncertainty holding back some finance decisions and new contracts.

So let’s not get political and worry about what ‘might’ happen and until we start seeing articles based on what ‘might not’ happen remember that everyone has an agenda and nobody will be held to account on the predictions they made in advance of the deal.
Like Optex, Dahua, Vimpex and Hikvision, let’s be positive.

Is 5G the future of intruder alarm systems?

How the EBPD could influence fire safety