Some call them cashpoints, others say cash machine, but the international term is ATM, which is an abbreviation for “automated counter machine”. Previously, ATMs were actual “cash machines”, as it was only possible to withdraw amounts in the national currency. Today, most ATMs are multifunctional machines, where you can choose between Pounds and Euros and in some ATMs, you can deposit banknotes into your account. In many countries, they also allow for services such as paying your bills and topping up your phone credit.

ATMs on the street and in lobbies

Nowadays, the ATMs attract the kind of thieves who would previously attempt banks raids. Most ATMs used to be located in the facade of the bank, so while machines were easy to access for bank customers, they would, on the other hand, become more vulnerable to pickpocketing and trick thieves. Many of the machines are now placed in shops, shopping centres, train stations or other places where many people pass by. An increasing number of ATMs are also placed in secured lobbies so people can manage their transactions without any problems. At the entrance to the lobby, a card reader is placed so that you can only access the room through your bank card.

Wherever the ATMs end up being placed, the thieves often succeed in gaining access to the machine lobby – and their means to get there are violent. There have been many examples of robbers using different kinds of explosives or gas to blow up the ATMs. Another method involves using heavy equipment to rip the machine out of the wall and then transport it away on a truck.

The robbery attempts are often very violent and always destroy the ATM and part of its valuable content. At the same time, innocent neighbours and the immediate surroundings of the vending machines maybe in danger. The same thing goes for the thieves themselves. There have been reported incidents in the past involving one death and several injured people who accidentally got hit during an attack on an ATM. Even though the criminals often do not succeed in their criminal endeavours, the property housing the ATM frequently experiences extensive damage. The fear of an attack causes, among other things, that owners of properties close to cash machines find it difficult to take out insurances on the building.

Records of physical attacks on ATMs in Europe show a sharp increase. From the first half of 2014 (1,032 attacks) to the first half of 2018 (2,046 attacks), the number of attacks has nearly doubled. When looking at the increase from the first half of 2017 to the same period in 2018, it has risen with 21% as well as a 24% increase in loss of cash from the ATMs (source: EAST). The costs of repairing or replacing ATM must be added to these numbers together with any damage to persons and properties. There are more than 3 million ATMs in place worldwide.

The ATMs are continually refilled and can, therefore, contain a relatively large amount of money, which causes them to be very desirable to thieves despite the fact that they are hard to break into.

Stop the thief before the attack starts

ATMs are classified according to how good they are at withstanding attempts of burglary and arson, as well as how environmentally friendly their usage is. Moreover, ATMs can be secured against attacks by explosives or gas, but the optimum would, of course, be to completely stop the thief before the attack begins.

By placing the ATMs inside shopping centres or in secured lobbies, they can be monitored with cameras and microphones as well as providing the machines’ surrounding area with sensors that detect any motion, vibration, gas attack, etc. An alert will be sent to the emergency centre that can subsequently dispatch security and call the police. 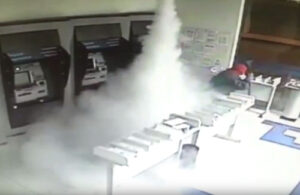 Valuables become hidden in the fog

There is, however, another solution to this problem, where the detectors trigger fog machines in order to cover the entire room in a dense fog. The valuables will be kept hidden, while the thieves will become increasingly stressed as the fog pushes them toward the exit. At the same time, the volume of fog will attract the attention of passers-by.

If the cash machines are located in a convenience stores or banks, for example, the solution can be expanded to protection against assault and robbery, where the employees can activate the fog machines with the help of a panic button.

“Security fog is a unique form of security as it hides the valuables even before the thief can cause any significant damage,” says Stine Jensen, who is the Global Segment Manager for the banking sector at fog machine manufacturer Protect. “If the criminal succeeds in his endeavour, the bank will encounter a number of other expenses and challenges in addition to the stolen money. A damaged building must be renovated and it can often take a very long time for a new ATM to be delivered.”

“Meanwhile, some of the bank’s customers might go to other branches or ATMs and the bank must spend a lot of time talking to the customers and supporting the employees after the attack. And then there are all practical matters when having to report to the insurance company, authorities and the bank’s management. All this time could have been spent on actual banking services.” 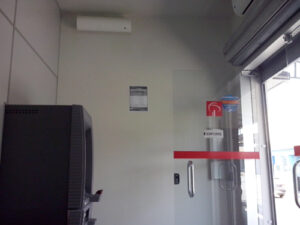 “With a properly installed fog machine, the damage will be minimal, and the same will then go for the downtime. It will likewise have a preventive effect when criminals find out that attacking the ATMs does not pay off,” Stine Jensen explains.

The fog machines are installed in such a way that they are activated by the first physical attack on the ATM or by unauthorised entry into the room. Therefore, the thief will be sent on the run before he gets to do any damage. Depending on the type of machine and its location, the fog machine can be hidden behind the machine or in the room above or next to it.

“It is important to our customers that the security fog actively stops the thief. Other forms of passive security, such as alarms and video surveillance, will make sure to alert the emergency centre when a burglary is in progress. Afterwards, they will be able to document the offence in both images and sound.”

“Security fog means fewer or no costs for repairs as well as almost no downtime, during which you wouldn’t have been able to use the machine,” Stine Jensen concludes.

Why did we launch the SiX installer event?