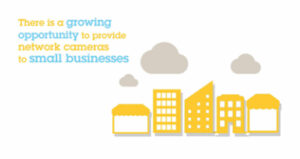 Research conducted amongst 500 UK small business owners has found that 82% of video surveillance users are considering replacing their existing system with more up-to-date technology. Of those that do not have video surveillance in place, over a third (39%) of businesses are considering implementing it in the next two years. Concerns over theft and loss in addition to a desire to apply the latest technology to ensure the best quality security were reported as the primary reasons for the growth forecast.

Axis Communications conducted the independent survey which also found that 38% of small businesses have suffered a break-in or theft at their business premises. However, it is clear that owners are tackling this issue as 62% already have a video surveillance solution in place. This trend is expected to increase as 78% stated that a break-in or theft within the business is a major concern now and in the future, demonstrating that it is a matter that is keeping small business owners awake at night. Two-thirds of respondents believe that with video surveillance in place, their business premises, people and assets would be more secure and it would ensure peace of mind for them and their staff.

James Lowman, Chief Executive of the Association of Convenience Stores (ACS) said: “Axis’ survey into the challenges facing small businesses and the increasing demand for video surveillance is representative of a wider trend. Convenience stores in the UK lost over £120 million last year as a result of crimes committed against their organisations, with shop theft alone costing over £43 million. Network cameras are a valuable tool for retailers, not just for reporting crimes when they happen but also to use as a preventative measure that discourages potential criminals. Our Local Shop Report shows that 78% of convenience stores have surveillance cameras in their business, and we also expect this to grow over the next year as more stores invest in effective crime prevention measures.”

Atul Rajput, Regional Director of Northern Europe, Axis Communications states, “Installers should expect to see an increase in demand for high-quality video surveillance solutions in the small business sector as owners seek confidence that their premises are secure from theft and loss. From our research we are seeing that features such as remote access technology are becoming increasingly sought after. Video surveillance technology is continuously evolving and small business owners are becoming notably more aware that in order to ensure a high-level of security, up-to-date and systems that deliver excellence quality are an essential purchase.”