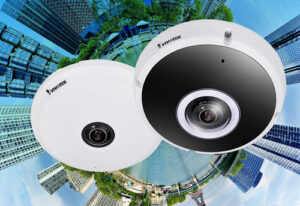 Powered by Vivotek’s people tracking AI engine, the FE9191 and FE9391-EV are smart-fisheye cameras with Smart 360 VCA technology. The Intrusion-Detection function is designed to protect any specific area against unauthorised entry. The Crowd-Detection function can detect and calculate how many persons occupy a given space and triggers alarms when capacity is reached in that area. Finally, the Loitering-Detection function can detect a person or people remaining too long in any selected area. Both cameras are embedded with Trend Micro’s anti-intrusion software to provide users with higher levels of network protection.

“In the past, surveillance cameras were built to meet security demands. However, how one minimises false alarms remains a challenge in the industry,” said Shengfu Cheng, Director of Marketing and Product Development Division, Vivotek. “Thanks to the development of AI, the FE9191 and FE9391-EV smart-fisheye cameras are programmed to learn to differentiate between the motion of people and objects. With the Smart 360 VCA technology, our fisheye cameras extend beyond purely for security applications, instead becoming intelligent devices to analyse how many and how long people stayed in a specific area.”

A new role for Darren Cooper at Pyronix